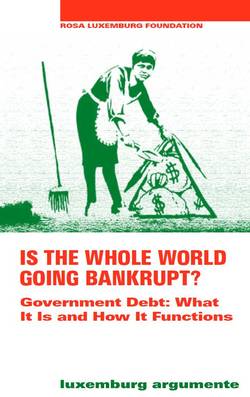 In the 1990s, it was “globalization.” Now “government debt” is considered the central problem of the world economy. The reason: for the first time since the Second World War, it is not the so-called developing countries that are experiencing a debt crisis, but rather established industrial countries. In Europe, a few governments have become insolvent and have to be financed by other states. In the United States, government debt has grown to levels that are otherwise only reached during wars. That is why Bild, Germany’s biggest tabloid, asked: “Is the Whole World Going Bankrupt?” (July 13, 2011), while the headline of the newsweekly Der Spiegel (32/2011) asked: “Is the World Going Bust?”

In the public discourse, two things seem to be clear: first, government debt is bad. And second, there is too much of it. “Saving” is therefore the order of the day. States want to become “trimmer,” public property is being privatized, and national wage levels are to be lowered in order to raise the level of “competitiveness” of the nation as a location for business. Government debt thus engenders the same political measures as the specter of “globalization” a decade ago.

Now all governments of the industrial countries have resolved to save more drastically. This affects the poor primarily in the form of social cuts – in all countries. Why is that the case? Where does all this debt come from? Why do all states incur debt – even though it is generally considered to be something bad? And why not just cancel these debts, if the whole world is suffering under them? These are some of the questions that this brochure seeks to answer. It does not attempt to assert that government debt is actually not a problem. Rather, it attempts to demonstrate the purposes that government debt serves, and when it becomes a problem – and for whom. Because ultimately, questions of debt are questions of distribution: some have to pay, while others benefit.

>>> »Is the whole World going bankrupt?«[pdf-file]

Translation of the original German version by Alexander Locascio.