The last few years of crisis politics were a prime example of how on the one hand profits are privatized, while on the other hand losses are socialized. The deep crisis of capitalism has left in its wake a sovereign debt crisis. The answer of the political class has been fiscal consolidation. Finance capital’s claims on returns are guaranteed and collected by the state. The invisible hand of the market is joined by the visible fist of the state. Struggles over state finances will be central battlefields in the next few years. 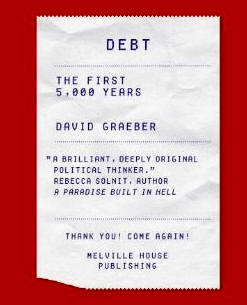 That is no doubt the reason why the publication of David Graeber’s book Debt: The First 5,000 Years was greeted with euphoria, even by the bourgeois press. In the Frankfurter Allgemeine Sonntagszeitung, Frank Schirrmacher wrote that Graeber »opens the reader’s eyes to what’s going on right now,« and furthermore, »Graeber’s text is a revelation, since one is no longer forced to react to the system itself within the system of apparent economic rationality.« Der Spiegel opines: »his book on the nature of debt and its economic and moral basis is already regarded as an anti-capitalist standard work of the new social movements which have emerged during the world economic crisis.« This is in reference to the Occupy protests. Even the chief economist of the Deutsche Bank group reviewed Graber’s book positively in the monthly economic policy journal Wirtschaftsdienst (4/2012) with regard to the question of the future of central banking. Since May 2012, the book has been available in a German edition.

David Graeber, anthropologist and anarchist, is a Professor at Goldsmiths College of the University of London. Until 2007, he taught Ethnology at the ivy league university Yale. For political reasons, his contract was not renewed – Graeber is a political activist. Since the protests against the World Economic Forum in New York City in 2002, he has been an important figure. The role that he has played in the Occupy movement underscores this: not only has he participated, but he has published books on the movement.

Graeber’s point of departure is the question as to why in capitalism the human appreciation of morality and justice is reduced to an economic quantity and the language of a business transaction – debt. The moral-economic double meaning of the word »debt« in many languages is striking. How have moral obligations and promises between people become an economic debt, and what does that mean for society?

For Graeber, debts constitute a promise – which is to say, a moral obligation – which also existed before capitalism and independent of money. Money makes the mutual promise between people into something impersonal and transferable: debt. Human cooperation, community, and possible forms of renegotiating promises are thus disturbed, existing relations of power and domination become cemented.

In this way, money makes it possible to »turn morality into a matter of impersonal arithmetic« with which promises can be balanced against each other. A settlement by means of debt cancellation, renegotiation, or non-commodified exchange relationships (gift giving or donation), as was still prevalent in pre-capitalist societies, is thus no longer possible.

Graeber thus concentrates upon a classical question of political economy, with which the book also begins: what is money? In the first part, Graeber correctly criticizes the theoretical mainstream of economics. Economics textbooks always begin with barter, an exchange of products without the mediation of money. Economists usually proceed from unhistorical models in which people pursue their »natural dispositions«, among others their drive to barter and exchange.

Graeber opposes all this with a historical argument. He proceeds from the assumption that credit and therefore the relationship between creditor and debtor historically precedes money. »The standard account of monetary history is precisely backwards«, namely the sequence from exchange to the discovery of money to the developed credit system. Graeber further hones his argument: money is not only a thing, but a means of making things commensurable. But exactly what is measured or compared? Graeber’s simple answer is: debt. Money and credit (that is to say, promises to pay) are for him de facto the same.

Graeber reconstructs the genesis of money from promises through various historical phases. From the time of early urban civilizations (Egypt, Mesopotamia, China) around 3000 to 800 B.C., through the Middle Ages (600-1450 A.D.) to the »Age of Great Capitalist Empires« from 1450 (to 1971).

In Graeber’s account, the state is responsible for the emergence of money, which was introduced in order to pay soldiers. The state thus at the same time also establishes the »currency« in which it collects taxes and generalizes the use of money. Simultaneously, markets arise alongside barracks and mass war production, and in turn money plays an increasingly important role in these markets. According to Graeber, state force, money/credit, and the dominance of markets are tightly interwoven.

Graeber’s account exhibits a rather vague understanding of capitalism, and in accordance with the anarchist tradition assigns a dominant role to the state. At the same time, this role is subordinated to the economy of obligation. The same is the case for other characteristics of capitalism. Monetary phenomena have existed long before factories and wage labor. However, one searches in vain in Graeber’s work for an exact determination of what capitalism is. One characteristic he offers is endless growth and the production of »an endlessly expanding volume of material goods«. Also central is the state’s promotion of an »economy of interest«; the history of capitalism is the history of »the gradual transformation of moral networks by the intrusion of the impersonal – and often vindictive – power of the state.« Against this background, it’s no wonder that Graeber concludes that markets and money will continue to exist after capitalism.

It’s not difficult to recognize that Graeber’s understanding of capitalism is not oriented toward Marx’s. However, whoever struggles against capitalist relations should nonetheless have an idea of what it is he or she is against. In the future, this must be a concern within the radical left. It is at this point that a critique of Graeber’s book should be applied.

In principle, Graeber proceeds from the starting point of a socioeconomic relationship that generates interest – the relationship between creditor and debtor; but class relations, the relation between wage labor and capital, and the form of production are not at the center of his focus. Thus, numerous relationships that characterize capitalism become indistinct in Graeber’s account.

Various actors engage in credit relationships. Debtors can be states, wage laborers, or businesses – for different reasons. The state, because it does not collect enough revenue from taxes or because it nationalizes bank losses; wage laborers, because they don’t earn enough; businesses, in order to make as much profit as possible. The perspective of credit, however, causes them to all look the same; the reason for the credit relationship that arises appears irrelevant.

This blurring of social relations is also apparent in the categories of money, credit, and capital, which in Graeber’s conception are indistinguishable from one another. According to Marx, on the other hand, they are forms that mediate quite distinct relations. Money completes a promise to pay, it is therefore itself the »general equivalent.« Money is accepted and used by all, whether wage laborer or capitalist. It mediates commodity exchange. Labor-power is also compensated in the form of money.

If money is supposed to be credit, as Graeber thinks, that raises the question as to what »real« act of monetary payment it supposedly refers. Capital is valorized value. When money is spent as capital, it always presupposes a class relation. Money is spent with the goal of making a profit. At the same time, this relation presupposes the existence of people who, free of both means of production and of personal ties of dependency, have nothing to sell but their labor-power. When capital takes the form of a property claim such as a stock, bond, or another security, Marx refers to it as »fictitious capital«. For Graeber, it’s again merely credit. Since he ascribes no relevance to these distinctions, all cats are grey to him.

The same is true for his historical observations. Graeber does not recognize what money and credit mean in pre-capitalist societies, what distinguishes them from each other. He works with trans-historical phenomena, without raising questions as to their historical-social form. This is a trait he shares with the economic mainstream that he otherwise criticizes. Graeber writes that systems of credit and accounting are as old as civilization itself. He admits that he finds it difficult to distinguish between gift-giving and credit; but this is only a problem if one discusses these forms of social intercourse independent from their respective dominant forms of production, when one does not clarify exactly what is characteristic of capitalism, what makes it capitalistic and thus what distinguishes it from other social formations.

Historically speaking, a social obligation is not the same thing as credit, and even credit is not the same thing as credit. This observation can be found in Marx’s work: »There was borrowing and lending in earlier situations as well, and usury is even the oldest of the antediluvian forms of capital. But borrowing and lending no more constitute credit than working constitutes industrial labour or free wage labour.« (Grundrisse) What does Marx mean by that? Under pre-capitalist relations, in which production was conducted to meet needs, credit was a means of impoverishment. In contrast, under capitalism, credit is a means of augmenting money – of profit maximization. Similarly, industrial labor (or factories in the case of Graeber’s book) cannot be simply identified with capitalist profit logic.

Although it is often asserted that a historical approach is able to show that something existed before capitalism, and that one can learn from history, the differences between capitalist and pre-capitalist societies are often obliterated (and not just in Graeber’s book) if one does not first clarify what is specific about capitalism, in order to use that as the starting point for delving into history – and not the other way around.[1. For that reason, historical research influenced by Marx controverts Graeber’s accounts of the market, credit, and money. On the imposition of the market as an imperative, see Ellen Meiksins Wood’s The Origin of Capitalism. On money, see Jacques LeGoff ‘s Your Money or Your Life: Economy and Religion in the Middle Ages. On credit, see Karl Polanyi’s Primitive, Archaic, and Modern Economies: Essays]

According to Graeber, every revolution begins with debt that society can no longer repay. »Cancel the debts and redistribute the land.« This sentence by the historian of antiquity Moses Finley is the only revolutionary program, recurring throughout the centuries. And most revolutions were preceded by (excessive) debt. However, before we can think about revolution, we should agree first on what exactly is supposed to be revolutionized. Debt cancellation is indeed a correct demand, but only when the social relations that constantly bring about indebtedness are abolished as well. It seems difficult to reach an agreement with Graeber on exactly what those social relations are.

Translation: communism.blogsport.eu (Thanks a lot!)

Article originally published in the May 18th, 2012 issue of the newspaper ak – analyse & kritik; an appendix is only available in German